“The EU imported record levels of used cooking oil (Uco) and biodiesel made from Uco (Ucome) in August, as appetite from European blenders and distributors showed no sign of slowing.”

The Netherlands took a record 30,000t in August, and Spain took 15,000t. Around 145,000t of UCO arrived in the Netherlands in January-August — before January no cargoes of any scale unloaded there. Spain received 70,000t.

Demand from Spanish producers — 140,000 t/yr Biocom Energia and 100,000 t/yr BioArag — could increase if, as is likely, Spain begins double-counting biodiesel made from waste oils against state mandates in the first quarter of 2019.

Volumes of UCO needed in Spain could jump next year — the 85,000 t/yr Linares Biodiesel facility in the south of the country has begun production of Ucome, after several years idle. Spain’s dominant palm oil biodiesel (PME) producer, the 1.1mn t/yr Musim Mas, is considering converting its 200,000 t/yr plant at Cartagena to run waste oils and fats in 2019.

Some concerns from traders and brokers over variable levels of sulphur and nitrogen in Chinese imports do not appear to be dampening demand.

The highest level of Chinese Ucome cargoes yet recorded arrived in the EU in August. Close to 40,000t was delivered, all to the Netherlands, up from 15,000t in July and just ahead of the previous record in May.

Chinese Ucome export volumes to the EU have been erratic last year. Larger cargoes were moved in February, May and August, but only 300t in April. Volumes were up by 52pc year on year, at 170,000t, in the first eight months of the year.

Many factors are influencing the amount of Chinese exports to Europe. Volumes are highly dependent on freight costs and seasonal conditions. Shipments of biodiesel from Argentina, made from soya oil (SME), have washed across Europe this year, cutting some demand for Chinese Ucome. Large quantities of PME have arrived in the EU from Indonesia. While Europe remains well supplied with biodiesel, demand for Chinese Ucome will fluctuate. There have also been some concerns from European customers over free fatty-acid levels in Chinese Ucome rising above EU standards.

China also has a growing internal market for biodiesel. Domestic producers could be encouraged to save supply to sate internal demand if forward prices decline in the Amsterdam-Rotterdam-Antwerp (ARA) region. 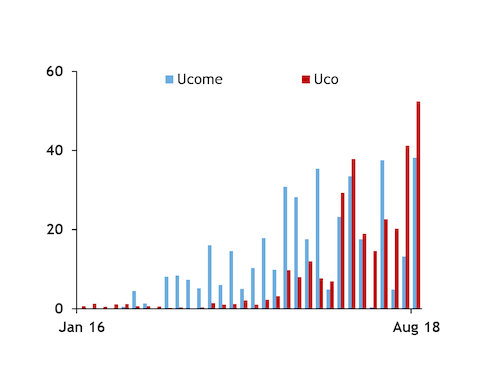 Oil Palm to Biofuel by The Prospect Group